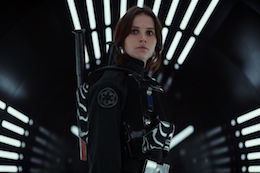 This blog was first published in January 2017

Robert Livingston reflects on film classifications and what they really mean.

In the last month I’ve been to see two new films, both rated 12A by the British Board of Film Classification (BBFC), and both likely to be considered by potential audiences as ‘children’s films’. One was a brutal tale of war, with scenes of desperate conflict and the onscreen deaths of thousands. It may well end up being viewed by children as young as 6 or 7. The other was a sweet fable about two teenagers who are strangely linked even though they’ve never met, and how they try to work together to avert a catastrophe. It’s an animation, but it’s not really for children.

I’m talking, of course, about Rogue One: a Star Wars Story, and also about the new animé from the marvellous director Makoto Shinkai, Your Name, in which he surpasses even his previous magical animations, The Place Promised in our Early Days and Five Centimeters per Second.

As Mark Kermode regularly notes, the BBFC recommend that, while legally a child of any age can be taken by an adult to a film rated ‘12A’, in most circumstances the youngest age should really be eight. I’m sure many Star Wars fans younger than that will be clamouring to see Rogue One, and may already have seen the previous The Force Awakens, also rated 12A, and coped happily with that film’s emotional challenges.
Normally I think that, on its website, the BBFC gives excellent detailed guidance on individual films, but the information on ‘Rogue One’ rather surprised me:

There are frequent gunfights, use of hand-held weapons, explosions and aerial dogfights between spaceships. Blood and injury detail is limited and brief.

Occasional scenes of mild threat include an interrogation and gun threat.
That sounds OK, doesn’t it? ‘Mild threat’? Well, as this happens in the first few minutes of the film I don’t think it’s a spoiler to say that, in the opening scene, a small child sees one of her parents being shot dead. And throughout the film the level of tension is really ratcheted up—one of the things that for me makes it better than The Force Awakens. And then there’s the ending….

I don’t have children, so I’m not the one to judge what age limit is really right for this film, but it’s worth remembering that the same film will have a hugely different impact in the cinema (and especially in 3D Imax!) than it will as a DVD viewed at home, on a smaller screen, in a safe space, when it can be paused at any time.

Many years ago, Danny Boyle’s Slumdog Millionaire posed us some real problems on the Screen Machine. The marketing called it the ‘feel good film of the year’, but it was rated a 15, and for very good reason: there are some shockingly violent moments. But on several occasions we had parents trying to smuggle in under-age children, in one case as young as eight! When challenged, the usual response would be ‘they see worse on DVD at home’. But that, of course, is just my point.

Turning to Your Name, I was rather surprised that this sweet and gentle film was a 12a, so I had to look up what the BBFC said, under the heading ‘Sex’:

In several scenes a male character who has woken up in a female character’s body reacts by feeling her breasts.

Well really. The characters in question are young teenagers. The girl is wearing her nightie in all the scenes in which this happens. Her much younger sister finds it very funny, and I’m sure any young child watching the film would find it equally funny. Sexual it is not.

But there’s another reason why this film, despite being an animation, is not for young children, and it’s nothing to do with language, sex, or violence. It’s because the ideas in the film are really complex, and sometimes hard to follow, depending as they do on deeply rooted aspects of Japanese culture and religion. This is not a Studio Ghibli film, accessible to all ages. Nor is it a violent manga like the newly re-released classic, Akira. But it is an animation for adults.

We’re thinking of trying it out on the Screen Machine. But how do you persuade our adult audiences that it’s not a children’s film, but rather an exceptionally beautiful, poetic and moving meditation on time, relationships, and gender? I have so many friends who not only have never seen an animé, but cannot imagine ever choosing to do so, and are baffled that my wife and I are such ardent fans. I found Your Name, and another recently released animé that I caught during the ‘Scotland Loves Animé’ Festival, A Silent Voice, almost as moving and memorable as my film of 2016, which is Arrival. But there are many people, who will share my high opinion of Arrival, for whom ‘animation for adults’ remains a contradiction in terms.

Please add your comments if you’ve any thoughts on this topic—I’d love to see what other people think!