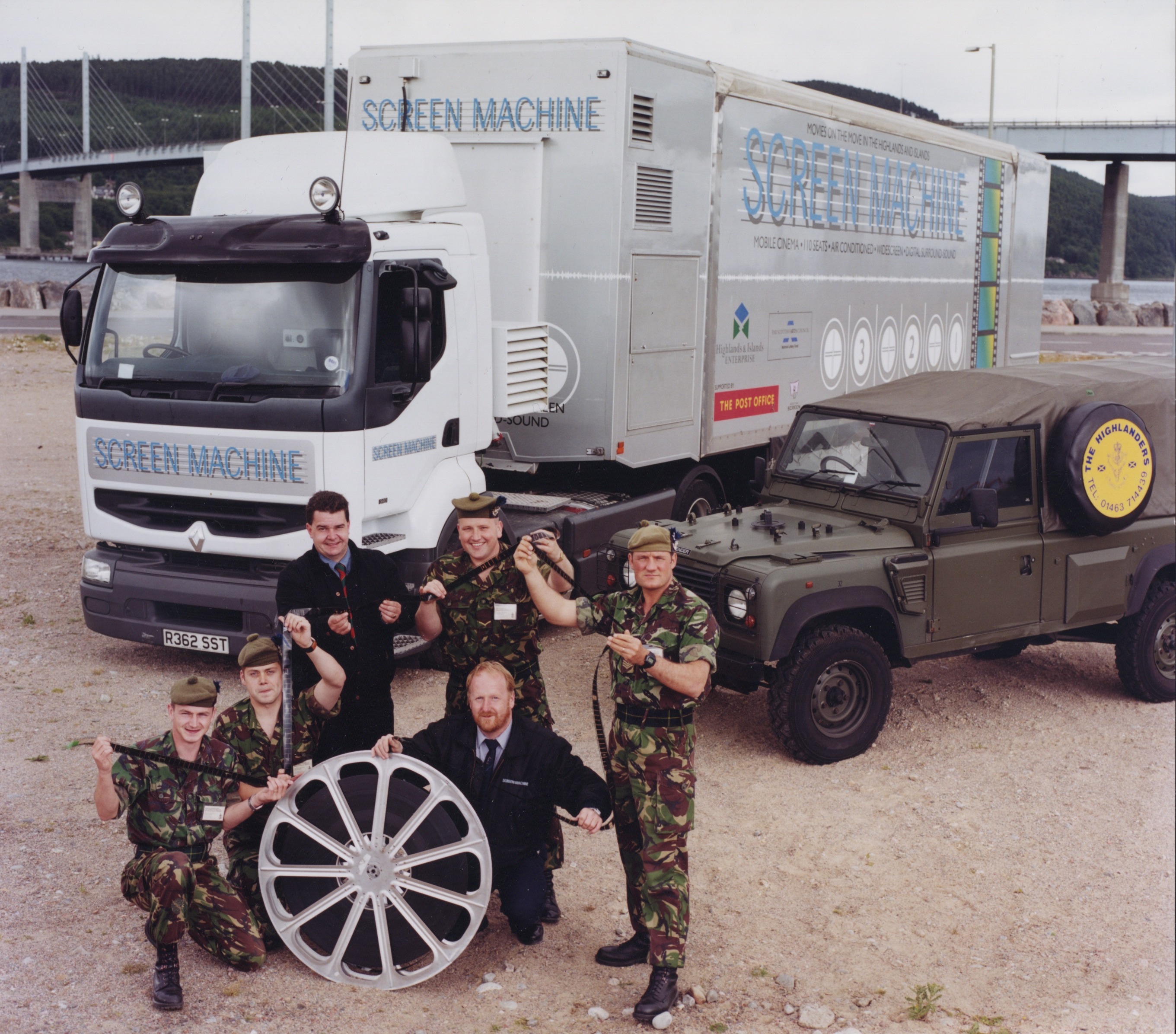 The idea of a wholly self-contained mobile cinema originated in France. In 1995 the Highlands were invited to be part of a UK study into the possible transfer from France of the Cinemobile model, as it was called.  A partnership of Highlands and Islands Enterprise, the Scottish Film Council and the then Highland Regional Council was formed.  The study was hugely positive, and the consortium agreed to go ahead with commissioning a Highland equivalent of the Cinemobile, chiefly through accessing the imminent National Lottery.  But also impending was Local Government reorganisation, and so a body called HI-Arts was commissioned to take forward the commissioning process to ensure continuity through that reorganisation. HI-Arts was then a small charity with just two existing staff, set up to be a cultural arm of HIE.

The wonderfully named Toutenkamion had built the French Cinemobiles, but was not at that time prepared to make the major changes needed to make their model suitable for the Highland context: lower height, on board generator, disabled access. The decision was therefore taken by the three agencies to commission a new design from a British maker, which had to be sufficiently different from the Cinemobile model to avoid copyright infringement.

So, Screen Machine 1 ended up being not only a prototype, but a prototype that, in the end, was being designed even as it was being built. Not surprisingly, SM1 had ongoing technical problems, although after many adventures (including the builders going insolvent before the Machine was handed over), SM1 became a great success with audiences and attracted international attention.  After it made two extraordinary visits to UN forces in Bosnia, the British Army commissioned their own Cinemobile from Toutenkamion, and two more were then built for organisations in Ireland.  This made the Screen Machine, and HI-Arts, great favourites with Toutenkamion!

In management terms, however, things had not gone to plan.  The newly formed Highland Council was unable to take on the operation of the SM, as its predecessor had intended, leaving HI-Arts to develop its own ways of running it, at first in tandem with Eden Court.  But, over the years, more and more services—programming, finance, schedule—were brought in-house and HI-Arts grew in size to take on the new responsibilities.

By 2002 it had become clear that SM1 could not continue indefinitely in full touring mode, and HI-Arts decided to commission a second Machine, but only if the funders agreed that the builder should be Toutenkamion, who were now prepared to make all the necessary changes to ensure a new Machine met all Highland requirements.

By this time the SM circuit, instead of being limited to the Highland Region, as originally planned, had extended to the whole of the Western Isles and much of Argyll and Bute, as well as occasional visits to the Outer Isles of Orkney and other locations.

With the aid of funding from the Scottish Arts Council National Lottery, Highlands and Islands Enterprise, and the Scottish Government’s Rural Development Programme, Screen Machine 2 was launched in 2005 and proved to be an immediate success, finally delivering the consistent quality service which had always been envisaged. SM1 acted for two years as a ‘stand-in’ cinema venue while Eden Court was rebuilt. It was then gifted to a cinema group in Market Harborough and eventually, scrapped, having functioned, against the odds, for more than the ten years originally planned.

In 2007 there came a major strategic initiative within Scottish Screen (which had replaced the Scottish Film Council), to develop network of ‘hubs’ to cover Scotland, made up of the four major arthouse venues (which have now become the members of a body called ‘Scottish Film’), and a new regional ‘hub’ to cover the areas not reached by these four venues.  The concept of this new regional hub was developed from a project which HI-Arts had run, called ‘Rural Cinema North’.

Scottish Screen therefore commissioned HI-Arts to set up this new hub, eventually named Regional Screen Scotland, and it was conceived from the outset that ownership, management and operation of the Screen Machine would be a core part of RSS’s remit.

Once RSS was set up as a separate company, there was a gradual process of transfer. HI-Arts continued to manage the payroll and all financial transactions, and the telephone bookings (the online box office was provided by the Booth, which HI-Arts had set up). But over time RSS’s brought in-house all the services that were being provided by HI-Arts and the Booth.

Since then Regional Screen Scotland has successfully taken the Screen Machine service forward, in 2013 celebrating the 15th anniversary of the original launch of the first Screen Machine, and in 2016 raising the funds from Creative Scotland, Highlands and Islands Enterprise and the Royal Bank of Scotland to carry out a major refit of Screen Machine 2, to be completed by June 2017 and thereby giving the Machine at least another six years of full operation.

Meanwhile, HI-Arts, the originator of the Screen Machine service, had been wound up, and its Director, Robert Livingston, had embarked on a freelance life as a cultural consultant.  But in 2015, when the post of CEO of RSS was advertised, the opportunity to get back to the Screen Machine was too good to miss, and Robert joined RSS in July that year, thereby being reunited with Senior Operator Iain MacColl, and Operator Neil MacDonald, who have been in post since, respectively, 1998 and 2015.

The other crucial members of the Regional Screen Scotland/Screen Machine team–all, like Robert, part-time–are Marketing Officer Fiona Fowler (who schedules the Screen Machine and promotes the screenings), Administrator Angie Jennings (who coordinates our huge network of local ushers, books sites for the Screen Machine, and keeps the records of ticket sales for the film distributors), and Book-keeper Brenda Fox, who keeps the financial records straight.

Regional Screen Scotland also has a much wider remit to enable more people, in more places, to share great screen experiences—you can read all about that at www.regionalscreenscotland.org — but the Screen Machine is, and will remain, at the heart of what we do.

One thought on “Screen Machine and Regional Screen Scotland: a brief history”