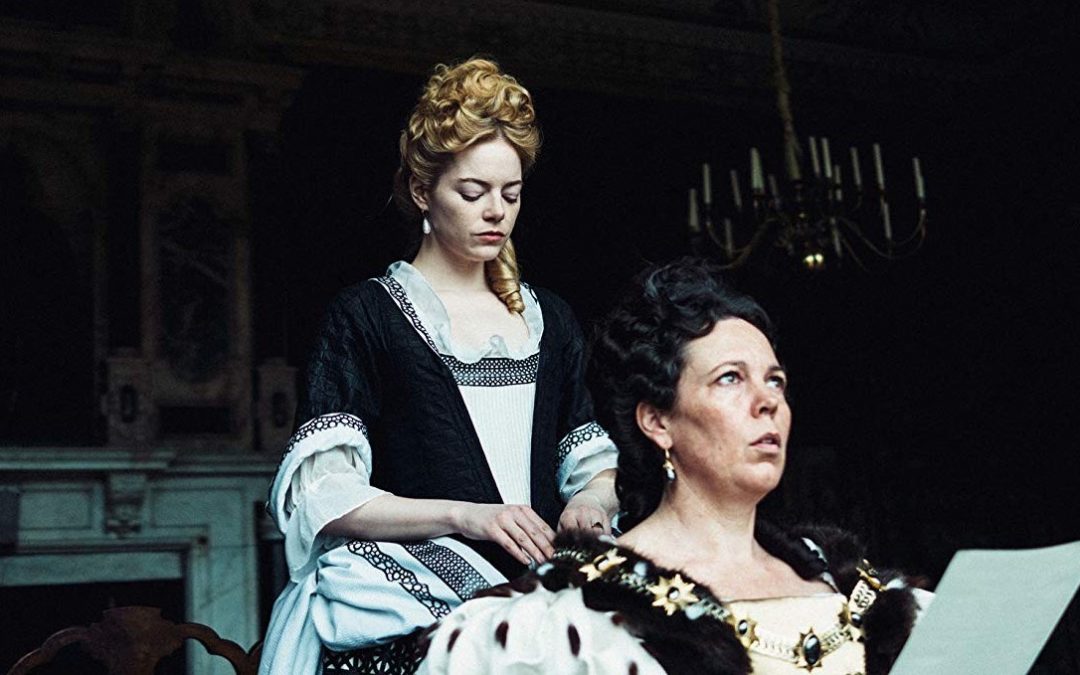 The Favourite has had a mainly positive reaction from our audience, with some huge praise coming in for the performances and eccentricities of the filmmaking. For those who don’t like it however, they really don’t like it!

Our first review of The Favourite came from Sally Semple, who saw it in Lochaline, calls it ‘Bonkers but Brilliant’ and gives it four stars.

The Favourite is a surreal rush of schemes, sex and shenanigans. I was expecting something a bit unusual but this was definitely out-the-box bonkers. I loved it. I loved the look of the film with extravagant costumes and distorted perspectives played out in fabulous interiors. I really enjoyed the performances. It was great to feel sympathy shifting between the three leads as their characters developed. I really enjoyed it.

Laugh, empathise, pity & wonder: I was left feeling all of these at some point during viewing…. the maneuvering, machinations, manipulations, enmity & distrust of all sexes at all levels of elite royal & political society displayed in this film leave you bewildered as to how anything of any importance got done if the film in any way reflects the reality of the time.

Not the best film I’ve ever watched but certainly not the worst, very glad I saw it and the cast act it superbly, would I recommend it to others? Yes without question, however, be prepared for language that is today considered almost taboo (not even sure it would have existed or meant the same thing 300 plus years ago but maybe it’s just representative of the language of the time) …. the impact of the final scenes on me was such that I was unusually rendered momentarily speechless – but only momentarily….

Michelle Mackay in Lairg was not so impressed with the film, giving it only one star:

‘Absolutely Awful’
Worst film ever. It had no relevant story, certainly not an informative historical story anyway. The music was loud with an annoying drumming sound throughout. I’m not a prude but I thought it was quite rude of a sexual nature and the word c*nt was used a lot. Overall very disappointing and no idea how it won as many awards!!!

Sally Lovell in Lochgilphead has gone even further in her praise than our first two reviewers, calling The Favourite ‘Sumptuous and Sensual’ and giving it 5 stars:

I loved this film for the story, the performances, the setting and the music. It was a bit weird in places to be sure, but life then was weird especially for women and I found the medical details and the fact that Queen Anne had lost 17 children incredibly poignant. The decadence of court and the relative impotence of men in that particular court was really fascinating and it was refreshing to have a film of all female main characters that were so complex and powerful. The costumes, settings and the subtlety of the way many scenes were lit reminded me of the BBC’s Wolf Hall. It created a magical other world atmosphere that draws you in. Finally what’s not to love about a story where rabbits are a queens comfort and joy. It was a very artistic and strange ending but beautiful none the less.

J Wilkinson in Tobermory also gave The Favourite 4 stars, telling us it is ‘An unusual film’:

The Favourite was a very unusual film, not quite what I expected. It was intriguing and at times uncomfortable viewing, while the sets and costumes were fabulous. The acting was superb but the script and content were very odd to my mind. A real Arthouse film, a typical Oscar winner whereby the judges look for the eccentric and unexpected.

Cheryl Callow, also in Tobermory was ‘Underwhelmed’ by The Favourite, giving it only one star:

I was so disappointed with this film. After all the reviews and interviews on TV it did not live up to the expectation.
I thought it was a dark humour and the setting was overrated. The annoying noise in the back ground and the story or love jealously story was OK but did not go anywhere. I left the Screen Machine thinking I had wasted two hours of my life. I think the acting was OK but nothing outstanding. Bitterly disappointed.

Karine Russell in Brodick had more of an even-handed review of The Favourite, giving it three stars and calling it ‘Interesting but odd’:

I wasn’t sure what I was expecting because I’d heard wildly differing views of the film… but I was fascinated by it. It was completely surreal. The acting was superb (Olivia Colman deserved her Oscar) and the settings and costumes were wonderful. The story was basically correct but with Hollywood additions which were probably complete rubbish and designed to hook a 21st century audience. I felt sorry for Queen Anne. She was caught between two ambitious, scheming women, and a whole cabinet of awful, ineffectual men. (A bit like today’s government really: plus ca change!)  Of the people I was with I was the only one that liked it. Would I recommend it to others? With reservations…

Do you agree with these fascinating takes on The Favourite, or have something else to say about the film? Submit your review below.