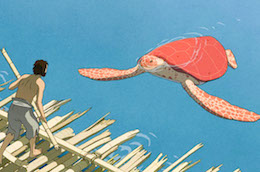 Back in January I wrote a blog about ‘when is a children’s film not a children’s film’ and I’m returning to the subject because of two forthcoming films in the Screen Machine programme. Relaunching our beautifully refurbished Screen Machine on Arran at the start of the month had reminded me of the time, many years ago, when one of our Arran customers wrote to ask us not to bring so many ‘children’s’ films to the island, as the population was mostly older folk.  Well, a little statistical research soon proved that, contrary to public perceptions, Arran’s population is not dominated by elderly retirees—something proved again this month when we had 60 primary pupils into the Screen Machine for a special partnership screening with Into Film.

But in any event the films our customer was complaining about were titles in the Harry Potter and Lord of the Rings franchises, both hugely popular with adult audiences, in Arran as elsewhere. Indeed, the second of the LOTR films, The Two Towers was one of the first films to be given a 12A classification by the BBFC, as the previous ‘12’ rating would have prevented any children under that age from seeing the film.  The addition of the ‘A’ put the onus on responsible adults to decide what was suitable for their children, while making it clear that this was not, primarily, a film for children.

What I really think our disappointed customer was asking was that we bring fewer fantasy films, with the presumption that there is something inherently childish about such movies.  Well, as my earlier blog will have revealed, I’m a sucker for both superhero movies and for Japanese animé, so naturally I’m going to defend such films against any charges of childishness!  Which brings me to our two forthcoming movies.

Wonder Woman is this summer’s really big blockbuster, and for many it’s been a long anticipated movie, both eagerly and with trepidation.  The previous entries in the ‘DC Comics Extended Universe’ (as it’s known), such as Batman v Superman: Dawn of Justice were grim affairs, receiving a poor critical reception.  Would the first superhero movie to be directed by a woman, Patty Jenkins, and the first for many years to have a female hero, fall into the same dour trap? Well, I saw the film last week and am happy to report that it is a delight.  Preposterous, of course, as superhero movies always are, but funny, exciting, and ultimately rather uplifting. And it’s very clear, from the comments reported on Kermode and Mayo’s Film Review that huge numbers of women, young and not so young, are finding the movie both exhilarating and empowering.  Not that this is some kind of superhero ‘chick flick’: the action sequences are thrillingly staged and, as Mark Cousins has pointed out, the relationship between Gal Gadot’s ‘Diana’ and Chris Pine’s ‘Steve Trevor’ is like something out of a Howards Hawks movie: the sparring of two equals who gradually grow in respect for each other.

In the same week I also saw a very different movie indeed, though one that also takes a mature view of human relationships.  The Japanese Studio Ghibli has produced some of the most beautiful animated films ever made. Now that its two founding directors have retired (though they seem to keep changing their minds about that!), the Studio is taking a new direction, and its latest film The Red Turtle, is a co-production with a Dutch-based company.  Now, although many Japanese animé are definitely not for young children (including such classics as Akira and Ghost in the Shell), Ghibli’s output has very much been aimed mostly at children and families, often, as in ‘Ponyo’, quite young children. Yes, films like their biggest success, Spirited Away, have some scary monster moments, but nothing to earn them more than a ‘PG’ rating.

The Red Turtle also has a ‘PG’ rating, but that doesn’t mean it’s suitable for youngsters who’ve loved other Ghibli films.  The BBFC entry http://www.bbfc.co.uk/releases/red-turtle-film refers to ‘mild threat’ to the central castaway, but, bizarrely, makes no reference at all to the film’s most excruciating passage *!!SPOILER ALERT!!* when the shipwrecked man, infuriated by a giant turtle’s repeated wrecking of his rafts (and hence foiling his attempts to escape the island), turns the turtle on its back and leaves it to bake in the sun. What follows, I’m glad to assure you, is then very strange, haunting and beautiful (and if I use the word ‘silkie’ you might guess what happens), but those few minutes make uncomfortable viewing for an adult, and I imagine could be very distressing indeed for young children.

The second half of the film, though it contains nothing to upset younger children, is then a mesmerising depiction of the progress of a human life.  Thought-provoking, moving, very beautiful, but all perhaps a bit slow and serious for younger children.

So, my message is: whether or not, in their different ways, Wonder Woman and The Red Turtle are considered suitable for children, I definitely recommend them as being suitable for adults!  Fantasies they may both be, but the first is wonderfully entertaining, the second unforgettably beautiful. I hope our audiences will enjoy both!

Follow this link to book for The Red Turtle in